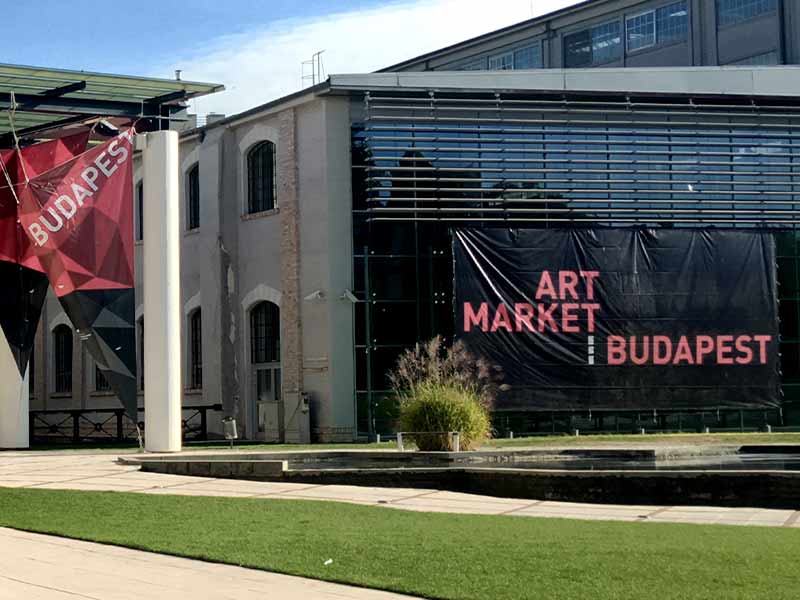 We are delighted to present the LUXLI project at the Art Market Budapest for the first time in such a framework and look forward to many talks and new contacts that will push this project forward. You can find us in Building D, upper level booth K205 (former K404) beside Art Runners Logistics Company.

After a short night in the hostel with an integrated dance club until four in the morning, it went tired to the exhibition ground. In the first room it felt like in the middle of the dancefloor. The friendly staff had another room one and so the second room was perfect to finally fall asleep. The next morning was swept up with glorious sunshine.

The first shock came shortly after arrival at the Fair. The booth had no back wall – where should the poster hung up? Thanks to the diligent staff Alexandra and Lilla who were able to fix this small problem quickly, even if there were some back and forth. But for the first day of the fair, which is also called construction day, this all was completely ok.

After the speech of the Fair founding director Attila Ledényi around 7 pm, with Hungarian “champagne” and warm white wine, the day ended in the KIOSK, a nice location near the Danube at Marcius 15. ter 4.

After a short night, the booth with a great bright view over the basement and the area gave the possibility to get in talk with exhibitors and guests. For example with two ladies from  BelArt from Novi  Sad, Serbia who were interested in the main idea of LUXLI ARTE_CONNExxION and the underwater photographer Harry Fayt from Liège.

In the afternoon there took place a live performance of Joseph Semah and two interesting presentations. First named BRIDGING PASSION AND INVESTMENT with Serge Tiroche (Tel Aviv, Israel) where he explained at first who he is and where he came from and next the idea of his Art Vantage Investment fund – The DeLeon Collection. The main idea is great and similar to the main idea of LUXLI. Serge Tiroche however started his fund in 2011 with 20 Mio $ and has generated in the average 6-8% per anno.

After his presentation LUXLI spoke to Serge Tiroche, presented the LUXLI idea and asked Serge for his opinion and improvement proposals. He suggested to focus on only one market at the beginning and to speak and understand the artist ideas. Thank you very much at this point for his appreciated opinion.

In connection to Serge’s presentation Isabel Bernheimer (Bernheimer Contemporary), Rony More (art please), Robert Runtak (Robert Runtak international collection) and Csaba Toth (AMC Networks Central Europe) talked about NEW GENERATION OF ART COLLECTORS – CONTEMPORARY MOTIVATIONS AND TRENDS ON THE ART MARKET. The summary is: paintings are still alive and the taste of the collector decides at the end about the selection of the artists. What insight! But definitely interesting.

Later at night we visited the Zoltan Kluger exhibition MODERNIST EYE IN A NEW LAND at Deak 17 Gallery in the Budapest City centre and went afterwards to the Photographer Tony McGee speech in Aria Hotel Budapest. He talked about his time with David Bowie when he took a series of pictures of him. Unfortunately he did not have much to say – but the way he did was nice.

Vesna Latinovic, founder of DIALOGUES contemporary art festival in Serbia, explained about the Festival in her country and the artists presenting their work there. It sounded very nice and maybe we will go there next year in the end of August.

Our booth was also visited from the founders of okka Architects in Hungary. They liked the idea of connecting artists from poor places of the world and present their work in the Northern Hemisphere and offered her knowledge to help if needed.

Great days in Budapest. Thanks to the organization team for their great job and their kindness all the days. 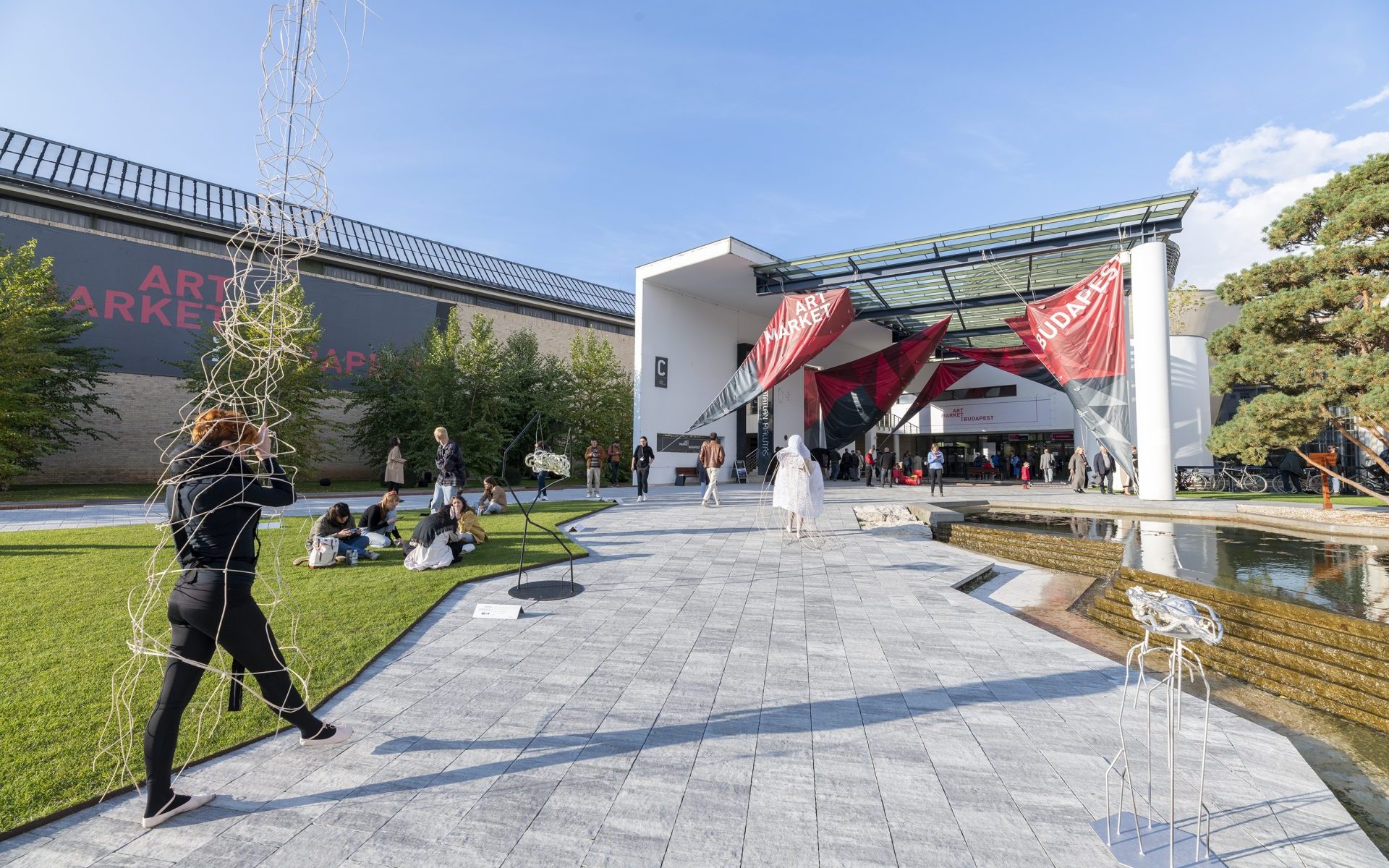 Art Market Budapest 2019 pulled in a phenomenal number of uses by universal exhibitors, empowering the occasion to offer the overall population a global workmanship experience of remarkable quality from one perspective, and to build up Budapest as one of the chief social focuses in Europe and the art capital of the district.

The one of a kind show lobbies and open air park of the as of late reestablished Millenáris Park gave remarkable solace and encounters to exhibitors and guests the same. On account of the reasonable’s in excess of 100 exhibitors, the scene’s more than 6,000-square meters display space made a huge number of fine arts by more than 500 artists accessible to the intrigued group of spectators just as to potential purchasers. Exhibitors at Art Market Budapest 2019 landed from Australia, Austria, China, the Czech Republic, France, Germany, Greece, Hungary, Israel, Italy, Japan, Montenegro, Poland, Romania, Russia, Serbia, Slovakia, Slovenia, South Africa, Spain, Switzerland, Turkey, the UK, the United Arab Emirates and the USA.

ART PHOTO BUDAPEST was established in 2014 as a segment of Art Market Budapest committed to the specialty of photography, and from that point forward it has become a satellite occasion of the reasonable and an exceptionally respected piece of the universal photography scene, a notable and appealing feature in the worldwide schedule of workmanship photography. As the sole universal craftsmanship photography reasonable in Central and Eastern Europe, its effectively finished release additionally raised its profile just as the job of Budapest as a recently rising global focal point of photography.

Art Photo Budapest exhibited no deficiency of treats for the consistently developing crowd of art photography: for instance, the photographic works of incredible drama tenor José Cura made their specialty reasonable introduction in Budapest. The expansive aesthetic substance of Art Photo Budapest covering all classes of photographic craftsmanship likewise incorporated the choice BAUHAUS CONTEMPORARY, effectively highlighted in Basel alongside Art Basel this year, and it heads out on from Budapest to Rome and different areas to raise worldwide consciousness of the job Hungarian craftsmen, for example, László Moholy-Nagy played in the Bauhaus development.

As one of the area’s driving contemporary artists foundation of worldwide criticalness, it is positively viewed as the strategic Art Market Budapest to unmistakably highlight, and increment the perceivability of workmanship from Central Europe. Hence, the prior effectively presented VISEGRAD CONTEMPORARY program was stretched out this year to likewise include Serbia other than the Czech Republic, Hungary, Poland and Slovakia. This program gives a chance to exhibitors from these five nations to show a universally unrivaled measure of works in the reasonable’s presentation lobbies. As a feature of this Central European center, the NEW VISEGRAD PHOTOGRAPHY presentation drew in craftsmanship colleges from the above nations to put the most youthful age of Central European picture takers in the focal point of consideration: this pivotal assortment of photographic works was propelled on a visit at Art Photo Budapest 2019, and during the following year it will be in plain view in the entirety of the locale’s capitals just as in various Western European urban communities.